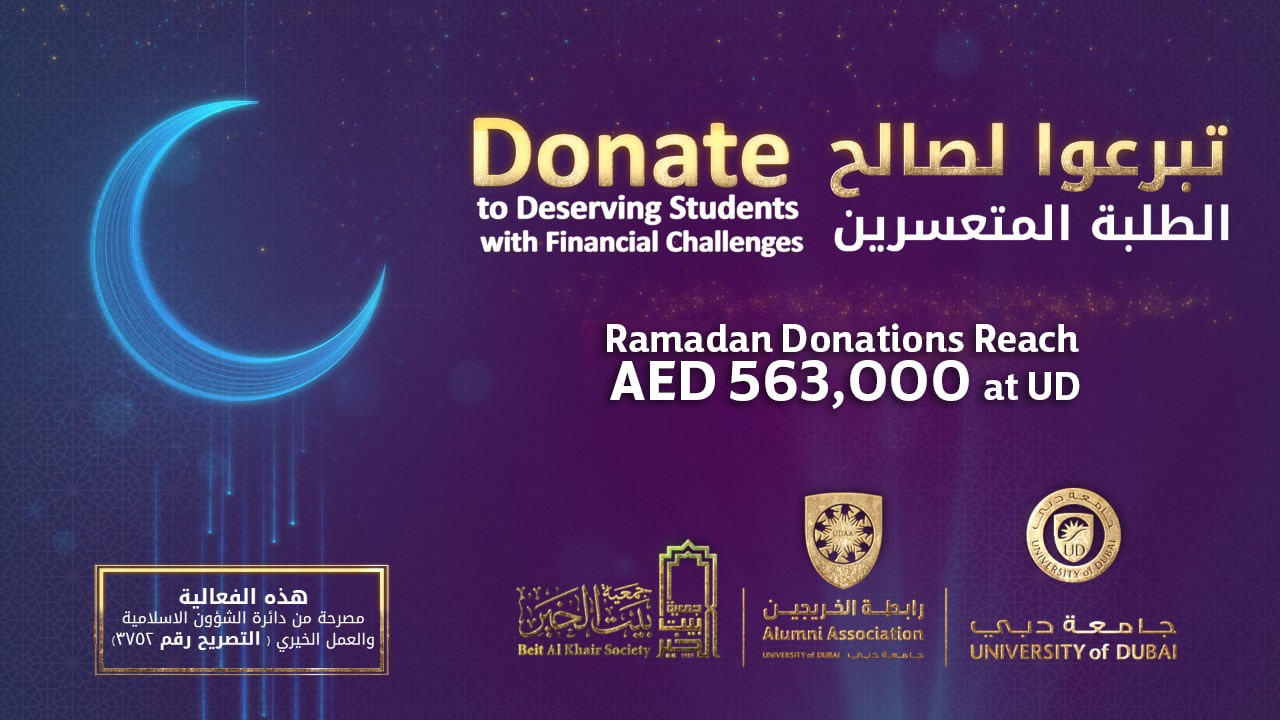 The University of Dubai (UD) announced that it has collected 563,500 dirhams during the virtual donation campaign, which was organized by its Alumni Relations Office throughout the holy month of Ramadan until the end of May, in cooperation with the Beit Al Khair Society.

Within the framework of its societal and humanitarian responsibilities, the University has allocated this amount to benefit the university students who are financially challenged and unable to pay their tuition fees.

UD President Dr. Eesa Bastaki said that the University offers its students various scholarships, and every year during the holy month of Ramadan, it provides its graduates and partners from government and private institutions the opportunity to donate and participate in supporting students who are struggling financially. He also thanked all donors and philanthropists who provided financial aid through this virtual charity campaign, pointing out that the University is keen to help students pay their dues so that they can obtain their degrees, graduate, get their dream jobs, and consequently contribute to the development of community service. “Voluntary or charitable work increases a person’s ability to interact and communicate with others, develops the individual’s social sense, contributes to making society more secure and more confident in its children, as it limits the materialistic mentality of its members,” he added.

Amina El Marzak, Director of the Internship & Career Development Center and the Alumni Relations Office at the University, said that the office exerted intensive efforts to achieve the highest possible number of donations for the benefit of students due to its eagerness to strengthen personal and societal values, highlight the essence of giving in the month of giving, and attract philanthropists.

She pointed out that the campaign, which was licensed by the Department of Islamic Affairs and Charitable Activities in Dubai, permit number “3752”, achieved its goals because of its importance, especially at this stage when the world is suffering from the negative effects of the Corona pandemic and its various repercussions on many individuals and societies.

“The University of Dubai Alumni Association, which is headed by HE Sheikh Mohammed Maktoum Juma Al Maktoum, organized a charitable Suhoor gathering during Ramadan and collected donations equivalent to five million dirhams that helped many students complete their studies,” she said. However, this year, the Corona pandemic has forced us to collect donations through a “digital” campaign, in which we called on donors and philanthropists to provide financial aid and help students in need, she added.