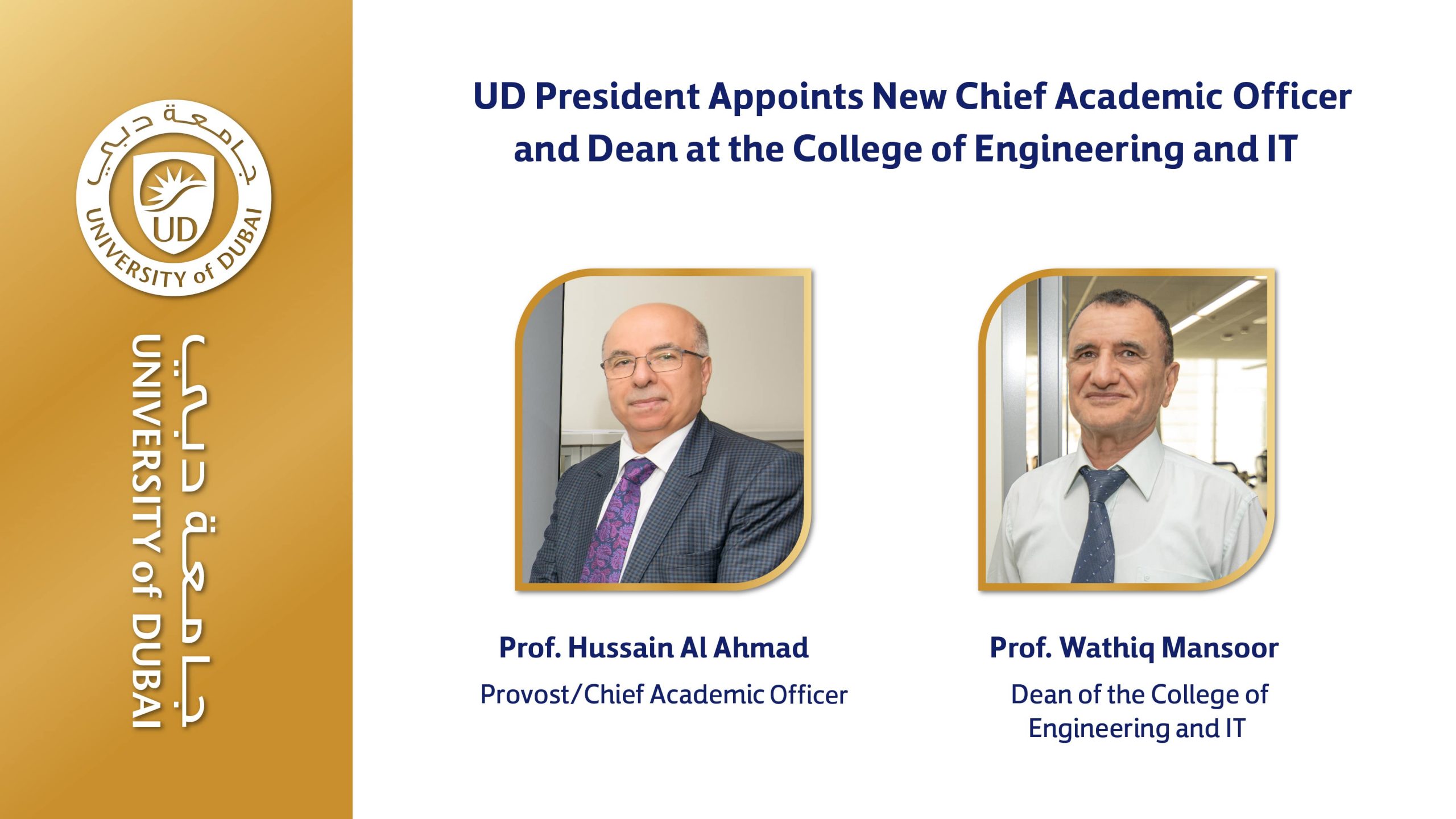 President of the University of Dubai Dr. Eesa Bastaki has appointed Professor Hussain Al Ahmad as the new Provost / Chief Academic Officer, and Dr. Watheq Mansour as the new Dean of the College of Engineering and Information Technology.

The new decisions came within the framework of the University’s strategic plan, its future directions, its interest in development and its keenness to keep up with the emerging requirements in the fields of modern scientific research, innovation and space research.

It is noteworthy that Professor Hussain Al Ahmad holds a PhD in Electronic Engineering from the University of Leeds in the United Kingdom, which is ranked among the top 100 universities in the world and has more than 100 papers published in international journals and conferences. In addition to that, Professor Al Ahmad has both a British and an American patent. Furthermore, he is a fellow of the British Engineering and Technology Society, a lifelong member of the American Society of Electrical and Electronic Engineers, a fellow of the British Royal Photographic Society, and currently he is the researcher supervising the work of 7 researchers at the laboratory of the Mohammed Bin Rashid Space Center for Satellite Image Processing and Remote Sensing Research.

Professor Al Ahmad has been working in the UAE for the past 24 years in the College of Communications at Khalifa University of Science and Technology and the College of Engineering and IT at the University of Dubai. He supervised 30 masters and doctoral dissertations in the United Kingdom and the United Arab Emirates. He was also the supervisor of the first PhD thesis in Engineering within the country and contributed to the establishment of the UAE branch of the Institute of Electrical and Electronics Engineers (IEEE). He also founded several subsidiary societies in communications, digital signal processing, and computers as well as contributed to hosting and bringing international conferences to the UAE.

As for Professor Watheq Mansour, the new Dean of the College of Engineering, he is a professor of Computer Engineering and holds a doctorate degree from Aston University in Britain, assuming academic positions in local and international universities. Dr. Mansour created and developed engineering programs in the universities he worked at and supervised numerous student projects in undergraduate and postgraduate studies. He also published research papers in international conferences and leading scientific journals. Moreover, he organized international conferences in specialized engineering fields and scientific student competitions in cooperation with the international IEEE. He established a business incubator for innovation and entrepreneurship at the University of Dubai in cooperation with Krypto Labs to enable students to create start-ups based on creativity and innovation.

Dr. Mansour believes that the focus is on the quality of education and its development using advanced technologies, as well as establishing advanced research centers in cooperation with governmental sectors, private institutions and local universities.